How caffeine combats Parkinson’s and Alzheimer’s

Your caffeine habits may help prevent neurodegenerative diseases such as Parkinson’s and Alzheimer’s. UNCG biology student John McCormick thinks he knows why.

McCormick is an undergraduate researcher in UNCG professor Zhenquan Jia’s molecular toxicology lab. Dr. Jia and his students look at natural compounds that cause and inhibit damage at the cellular level. “We try and find the molecular mechanisms for toxic and antitoxic effects,” McCormick explains. When McCormick and Jia learned that people who consume more coffee are less likely to develop Parkinson’s and Alzheimer’s, they decided to dig down to the cellular level for answers.

If peroxynitrite is the culprit, McCormick and Jia wondered, could caffeine be preventing peroxynitrite damage from happening, thus delaying or preventing the onset of Parkinson’s and Alzheimer’s? 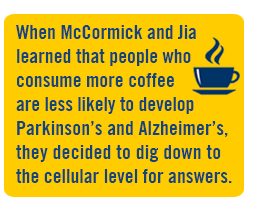 Based on his in vitro experiments, McCormick says yes. His results showed that peroxynitrite significantly damages cell DNA, altering the DNA from its normal supercoiled configuration to open circular and linear forms. Such changes would cause cell damage and death, which supports the hypothesis that peroxynitrite levels in neural cells contribute to the neurodegeneration characteristic of Parkinson’s and Alzheimer’s. Next, McCormick demonstrated that caffeine specifically inhibits the peroxynitrite-induced DNA damage. The findings are strong evidence that caffeine acts as an antioxidant, scavenging peroxynitrite molecules before they can damage DNA.

This semester, McCormick will begin the process of publishing his exciting results. But the UNCG senior is not resting there. He plans to strengthen his findings by repeating his studies in actual neural cells, and he will dig deeper into the reasons behind his results. “We want to find the actual mechanism,” he explains. “So right now I’m doing research to find out how caffeine might be scavenging peroxynitrite and its byproducts.”

In light of McCormick’s findings, students in Jia’s lab are also assessing other natural antioxidants, like resveratrol from red wine and lipoflavonoids from beans, to see if they have similar inhibitory effects on peroxynitrite-induced DNA damage. Their encouraging preliminary results may point the way to novel treatments for Alzheimer’s and Parkinson’s.

McCormick’s passion for research is rooted in his personal history. McCormick originally attended Virginia Tech as a film and biology major, but a struggle with leukemia forced him to drop out his junior year. His own life-saving bone marrow transplant sparked his interest in research and even led him to work in a bone marrow transplant lab. “I came to love transplant research,” John says. “The research involved determining the chemicals that cells are using to communicate with each other.”

When McCormick enrolled at UNCG to finally finish his degree, he knew he wanted to continue doing laboratory research. “I liked Dr. Jia’s lab because it’s a molecular toxicology lab, and his work was similar to my interests in signaling and immunology. But I also liked that his projects involved natural compounds.” Dr. Zhenquan Jia has a background in Chinese remedies. Much of his research involves translating traditional processes and techniques into the language, method, and tradition of science. “Often, we know that things are good for us, but we don’t know why. In Jia’s lab, we look at the chemical mechanisms by which these compounds protect our cells.”

When the future med student graduates from UNCG in 2015, he will be walking away with much more than a degree. He will have already made original contributions to his field.

Article author Peter Hess is an Environmental Studies intern working with the UNCG Office of Research and Economic Development. His writing focuses on the important research being conducted by members of the UNCG community. Peter is an environmental studies student in his senior year at UNCG. His passion for communicating science to the public led to his current position.