In 1976, Dr. Charles Prysby was greatly surprised when his neighbor, Jim, expressed support for conservative presidential candidate Gerald Ford. Prysby knew that, in the previous election, Jim had voted for liberal George McGovern. But his neighbor didn’t see any inconsistency. “In Jim’s mind,” explains Prysby, ”it was all about trust.” In ’72, he didn’t trust Nixon. “This time around, he just didn’t feel like he could trust Carter.”

Prysby and Dr. David Holian, UNCG political science professors and coauthors of Candidate Character Traits in Presidential Elections, will tell you that, for about 80 percent of voters, decisions come down to party and ideology. But for the not insignificant remainder –— some of them independents and some of them simply more “persuadable” Democrats and Republicans — character traits can make a real difference.

Dr. Holian was 9 years old when Dr. Prysby had his enlightening conversation with Jim. For Holian, the seeds of this book are instead rooted in his 2000 election experiences. Many media pundits claimed that George W. Bush defeated Al Gore on the power of personality. The prevailing narrative? Gore was too dull, too pedantic, while George W. was someone you could grab a beer with. The election left Holian wondering about the impact of likeability and personal warmth on voter decisions. 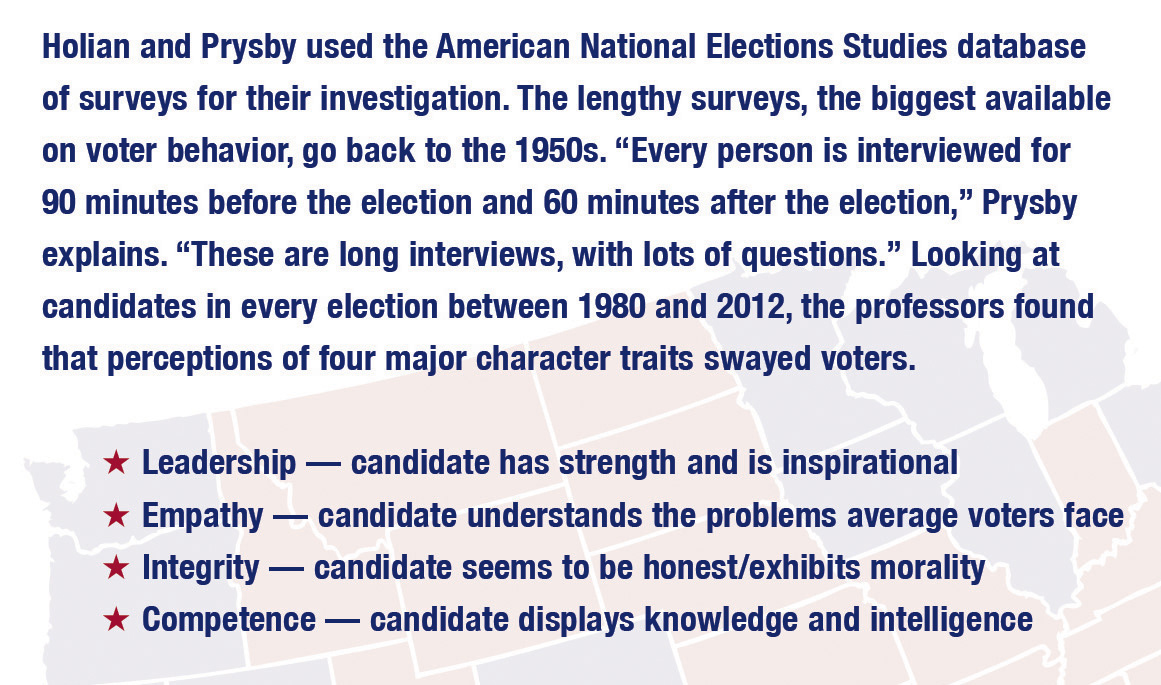 What the professors found surprised them. Yes, personal traits matter. But most people aren’t assessing personal traits in terms of whom they’d rather have as a bowling buddy. They’re looking for leadership, empathy, integrity, and competence.

Which of the four traits matter the most to voters? “Election after election, leadership and empathy are the two most important,” says Holian.

Republican candidates almost always do better on leadership, adds Prysby, while Democratic candidates always lead on empathy. “If you think about the issues, the Republicans tend to support a strong, aggressive national defense, which might create perceptions of Republican candidates as stronger leaders. Democrats, the protectors of the social safety nets, have an advantage in that voters on balance see them as more likely to understand the problems of normal folks.”

One reason the race was so close in 2000 and 2004 is because George W. Bush scored higher on empathy than most Republicans do, explains Prysby. “His platform of ‘compassionate conservatism’ was smart, strategically.”

The highest scorers across traits in the book? Obama in 2008 and Reagan in 1984. Both candidates won the independent vote in their respective elections. “Candidates who were very strong with independents have been very strong on the four traits,” confirms Holian.

By Mike Harris and Sangeetha Shivaji

Read more in the 2016 spring issue of UNCG Research Magazine