Managers worldwide struggle with this issue.

A team of capable people struggles, putting their project in jeopardy. The cause: One team member isn’t pulling his or her weight. The others chafe at this individual’s lack of effort. Some might call the person a slacker; among global virtual teams, the term is “free rider.”

What strategies can a manager take to resolve the issue? Better yet, which strategy has been field-tested and statistically proven as the best approach?

Vasyl Taras, an associate professor of international business in UNCG’s Bryan School of Business and Economics, has the answer, thanks to the X-Culture project.

He launched the project in fall 2010 as a way to give his MBA students a taste of international business experience — before they plunge into the world of global commerce.

That experiment has turned into an international success, with dozens of cooperating universities and thousands of students each semester.

Scattered about the globe, students usually work in teams of seven. Their communication tools are email, Skype, Google Docs, and Dropbox. Their challenges include varied time zones, diverse cultures, preconceptions, and prejudices.

Though students typically earn only a grade and a certificate upon completion, X-Culture mirrors a real-world corporate project experience. For a freshly minted MBA or business undergrad, that’s invaluable.

X-Culture project alumni find that the experience gives them an advantage in the job hunt. And the results produced by the student teams are so well respected that companies ranging from Louis Vuitton to Home Depot have come knocking, seeking the assistance of X-Culture’s expertise.

Textbooks and professors make this plain to students. But as every skydiver knows, there’s a difference between studying the sport and leaping out of a plane.

“The whole idea behind X-Culture was that people would work with people from other cultures and would experience, in practice, what we are telling them in the classroom,” Dr. Taras says.

Early on, Taras determined that almost all international business courses use similar textbooks that emphasize 16 standard topics. If students around the world are studying a similar, basic curriculum, he wondered, why not give them hands-on, global experience to reinforce their business diplomas? 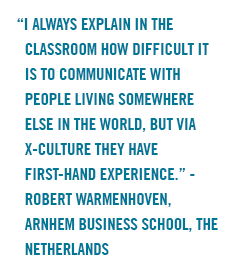 Taras envisioned creating global virtual teams of students. Each team member would be from a different university and nation. Whether in Cape Town or Riga or Singapore or Dublin or Greensboro, team members would have to cope with the differences of time, locale, institution, and culture. English, the international language of business, would be used for verbal and written communication.

Each team would undertake a business task, such as performing a market feasibility study for a product or solving a logistics issue.

In launching his project, Taras reached out over the Internet, seeking a few international partners to test his idea. The response from colleagues was immediate and enthusiastic. Suddenly, he was coordinating a global virtual program from his tidy office in the Bryan School, a program that didn’t even have a name.

Brainstorming with colleagues led to the idea of X-Culture. “I don’t even remember who said it,” Taras says. Having X in the name refers, in part, to intentionally creating experiences across cultures. A sketch on a napkin roughed out a logo. In short order, Taras had a brand.

International experiences shaped Taras and his academic pursuits. His doctoral dissertation examined how quickly, and how thoroughly, immigrants assimilate culturally in their adopted country.

“I was born in Ukraine and have lived in a number of countries,” he says. “That’s how I developed an interest in cross-cultural stuff.”

Others are interested also. So far, X-Culture has involved nearly 500 professors from a variety of disciplines. In addition to business, these fields include marketing, entrepreneurship, and cross-cultural psychology.

Engineering students from a Mexican university take part every semester. “They know that engineers will have to work across borders,” Taras says. “They really don’t care what the task is. They want to work with people who are in a different country.”

X-Culture has engaged about 35,000 students and counting. Taras coordinates the program, assisted by a couple of UNCG graduate students and a paid administrative assistant in Ukraine. The team, as well as all of the participating professors, operates in the same digital, global environment that X-Culture students experience.

The X-Culture project has a Facebook page — started by a former student — with more than 86,000 followers. “I assume that at least two-thirds of them just find our project interesting,” Taras quips. He’s always analyzing data, even Facebook “likes.”

Data accumulation wasn’t on his mind when Taras started X-Culture. But at the first X-Culture conference, which brought together students and professors face-to-face, someone suggested he begin collecting data. Taras remembers hearing, “You have all those students!” 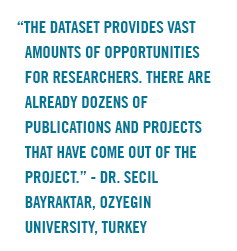 Here’s why, data-wise, that’s so important.

“Now we measure anything and everything possible that can predict performance in global virtual teams,” Taras says. Determining factors range from culture and cultural differences to “technical skills, personality, demographics, all those kinds of things.”

So why not study global virtual teams of real corporate employees? It’s not practical, Taras says, starting with corporate cooperation. Teams form and disband rapidly, and members have no compelling reason to answer a third party’s questions. (They’ve got work to do.)

The X-Culture project offers many benefits. X-Culture’s scope provides hundreds, if not thousands, of study participants each semester. The teams are stable and in place for several weeks. Most members typically are in their late 20s or early 30s, rather similar to a workforce. This means that findings based on this sample probably correlate well to the real corporate environment. As a result, companies consider the data collected to be trustworthy, Taras says, giving study results more gravitas.

Academic researchers poring over the data explore topics that range from interesting to mission critical. Their findings are of interest to companies looking for a competitive edge.

Take those free riders, for instance. Taras and his colleagues had ideas about how to identify free riders and take action to rectify the situation.

“We thought of a couple of solutions, and we tested them on the global virtual teams,” Taras says.

“One reduced free-riding by 52 percent.” Now he can advise corporations on strategies for reducing free-riding, plus cite costs and benefits.

“We have real companies, with real, live challenges,” Taras says. “They want to know the answers.” Project reports generated by the student teams, he says, are “virtually indistinguishable from real consulting projects.”

X-Culture students have researched how a maker of luxury Italian shoes might break into the U.S. market. Instead of just offering theoretical strategies, the team interested a U.S. retailer in importing and selling the brand. That experience convinced the shoemaker that entering the U.S. market was feasible.

Another team investigated the hurdles that a South American chocolatier would have to navigate to export its products.

Taras says the X-Culture project’s data is a rich and ever-growing resource, full of answers to questions yet to be posed. So he’s tossed out the welcome mat to researchers everywhere.

“Join us on the knowledge treasure hunt,” he writes at X-Culture.org. “We offer our own huge database to the world.”

Just as crowd-sourcing, open data sharing, and large-scale collaboration have led to new discoveries about the human genome and the cosmos, Taras believes they offer opportunities to advance business knowledge.

“We believe there is never too much brainpower. More researchers mean more, better ideas and studies. There are many discoveries hidden in our data.”