All Fun and Game Theory

“I would much rather spend my summer looking at math than on a beach somewhere. It’s just more exciting,” says undergraduate MaLyn Lawhorn, without a hint of sarcasm. She’s in luck, thanks to the landlocked math-bio program at UNCG.

MaLyn, who hails from Winthrop University, is partnered with Rachel Schomaker, a biology major from Florida Southern College. Their research project could radically change the way gene expression patterns are analyzed. In the same classroom, Casey Carter of Northern Kentucky University and Stephanie Rhoten of Gonzaga University discuss their new model for disease outbreak. They’re updating an older infectious disease model to factor in quarantine. “What we’re hoping to do,” explains Stephanie, “is find a level of quarantine where we can get rid of the disease.”

These undergraduate students, ten in total, are conducting research in Greensboro thanks to a National Science Foundation Research Experience for Undergraduates (REU) grant. REUs provide undergraduates with summers of hands-on experience. Students stretch beyond their disciplines, conduct laborious research, and deliver presentations on their findings. It’s a competitive program – over a hundred students from Massachusetts to California vied for a seat in the program this year.

Communication is a hallmark of the UNCG program. The students receive rigorous training on conveying their findings and present at least once a week. Dr. Jan Rychtář, the principal investigator of the program, jokes, “I can wake them up in the middle of the night and tell them, ‘you do the presentation now’ and they should be able to.”

Rychtář mentors students Dennis Silva and Nina Galanter. They work with the Territorial Raiding Game, a model that looks at territorial defense and invasion behaviors. In large heterogeneous populations, many factors determine whether a group will defend its resources or raid and acquire new ones.

“We let the machine, or the computer, learn how to play the specific game that we’re looking at,” explains Dennis, a senior at Worcester Polytechnic Institute. He’s a math major with a computer science minor. “Different organisms can live at different locations, and they want to get as many resources as possible. So they can either stay home and protect their own resources, or they can try to gain additional resources by going to neighboring locations and trying to get resources from them. And by adding in a few simple rules, we’re trying to investigate what the most optimized ways of getting the most resources are for each individual player.”

“This is a completely biological question,” notes Rychtář, “but the students were able to formulate it, innovate it, and integrate it into a mathematical setting and provide a purely mathematical result.” 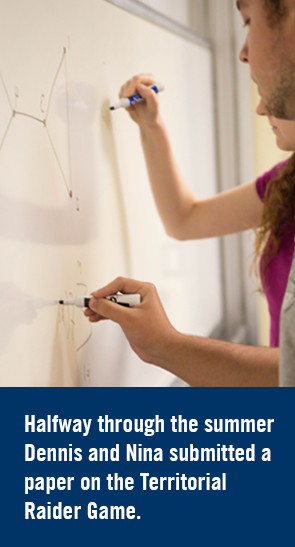 This brand of integration beats at the heart of the REU program. Each of the projects combines elements of math and biology. Dr. Rowell, co-principal investigator of the program, is developing a population dynamics model with his undergraduate research team. It’s a continuation of a 2014 REU project, which models the dynamics of independent and collaborative populations. In independent populations, each organism works towards its own success, but in collaborative populations, group fitness depends on organisms working together. Rowell and his researchers are now updating the model to include instances where organisms change behavior, shifting from independent to collaborative – or vice versa.

Dr. Rueppell is the program’s biology professor, guiding the gene expression research conducted by MaLyn and Rachel. “The outcome that we might achieve with this project is quite interesting and hopefully will have a wide impact on the field, but that’s only one of the outcomes. The other outcome is the students that hopefully come out of here with an interdisciplinary understanding and build a career on that experience and maybe explore a little more than their disciplinary training and their university teaches them.”

This summer concludes UNCG’s second Math-Bio REU program. However, the undergrad research collaboration is actually in its 9th year. It started in 2006 with another NSF grant, Interdisciplinary Training for Undergraduates in Biological and Mathematical Sciences (UBM). The program took in eight UNCG undergraduates every year, partnering math and biology students in interdisciplinary research teams. UBM resulted in 25 awards, 41 papers, 57 international presentations, 50 national and state level presentations, and over 150 presentations at the regional level.

“The main feature of the program was that the biologists had to work on the mathematical models, and mathematicians should get their hands dirty during the experiment,” quips Rychtář. “So we really had to go out to the field.” He recounts an early math-biology day spent on a farm. The researchers sought out fresh cow dung beneath the blistering sun and waited for the beetles to come. “All of this just to collect a few data points. It was a lot of work. I gained a big respect for biologists.” 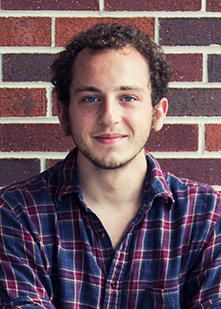 Author Ben Tasho is a Media and Communication Intern with the UNCG Office of Research and Economic Development. He researches and writes articles about the on and off campus impacts of UNCG research. Ben is a sophomore at UNCG, majoring in Media Studies. His interest in writing, media, and education led him to his current position.