If you walk into Dr. Chris Rhea’s research lab, you might think you’ve walked onto an animated movie set or into the planning stages for video game graphics. At any given point, there’s likely someone covered in reflective dots, walking on a treadmill, or being filmed by a 3D high-definition camera that records the body as a stick figure.

But what you’re really seeing is novel, state-of-the-art research into how individuals who’ve suffered a stroke or had an amputation might learn to reclaim their normal walking patterns.

Rhea’s lab is one of roughly 10 nationwide contributing to this type of research. The main tool supporting his work is virtual reality, or VR. VR itself isn’t new, but it’s just now being applied to this type of medical research, making Rhea’s investigations groundbreaking.

To help individuals who’ve suffered strokes, Rhea pairs the treadmill with a complicated mathematical pattern recognition algorithm and a software program. The software measures the body’s angles, trunk rotation, and limb symmetry to record exactly what the walker does and then runs that data through the algorithm.

Doing so creates an objective, baseline assessment, he says, that is used to build an avatar, which is projected on a split-screen alongside the participant’s walking pattern. Individuals use the avatar as a guide, trying to copy its movements to retrain their bodies into healthy walking patterns.

“Most healthy people have a range of movements within certain signatures, but if you get outside that range, it increases your risk for an injury due to a fall. That’s what we see with stroke patients,” he says. “The software and algorithms give us a quantitative way to measure walking patterns in different clinical populations and help them make changes.”

So far, Rhea’s team has mostly tested this technique with undergraduate students — approximately 600. But nearly 100 participants recruited from local doctors’ offices have contributed as well. 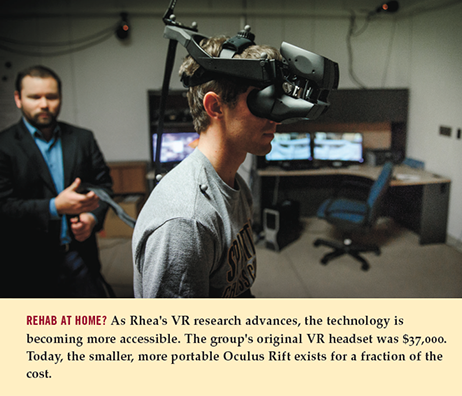 Rhea also works with individuals with amputations, but in a slightly different way. Working closely with clinicians, he and his students designed a VR program that helps these individuals learn how to walk with prosthetic devices without falling. Input from the community clinicians who treat these individuals frequently is critical, he says, to creating a program that pushes a participant’s abilities without exhausting him or her too quickly.

These participants wear a headset, called the Oculus Rift, which simulates a walk through the woods or down a street, so individuals can move at their own pace. Obstacles appear at intermittent times and heights, and participants must navigate around or over them to successfully complete the task.

“The goal with this project is to see if we can train these individuals in a virtual environment to step over objects,” Rhea says. “And can they transfer that ability to the real world?”

As with the research with stroke patients, the lab is still fine-tuning this technique, using undergraduate students to tweak the methods. It won’t be ready for clinical use until the team has identified which programs are most effective and efficient.

The wait, though, has its benefits. Over the next few years, Rhea’s VR rehabilitation advancements will likely be more affordable and accessible for the broader clinical community. Not only is the software required to run the programs rapidly becoming open-source, meaning it’s freely available to anyone, but the Oculus Rift headset the participants with amputations use to simulate walks is much cheaper than similar equipment purchased in previous years. For example, when Rhea’s group purchased a VR headset in 2011, its price tag was $37,000. Today, the smaller, more portable Oculus Rift exists for a fraction of the cost — $350.

Rhea’s lab has also invested in a new omnidirectional, low-friction, bowl-shaped treadmill called the Virtuix Omni that is roughly half the size of a standard treadmill. When paired with the lower-cost Oculus Rift, the $500 Virtuix creates an effective rehabilitation system for less than $1,000, well within the budgets of most clinics.

Other elements of Rhea’s work have applications far outside the traditional clinic. With $1 million in funding from the U.S. Department of Defense, his team is designing a smartphone-based app to test whether soldiers injured in the field have sustained a concussion severe enough to be removed from duty.

“This research is important because concussion can range from mild to severe, with the mild version being more difficult to detect — yet it could still have serious implications on balance and cognitive ability,” he says. “There’s not really a good way to test in the field for mild concussions. But the last thing you want is someone with a concussion making life-and-death decisions for themselves or their entire unit.”

Time available to test whether a soldier has sustained a concussion is limited in a combat zone, and usually a combat medic, not a doctor, is the only medical personnel available. Consequently, the military needs an easy-to-use, accurate tool that can diagnose concussion severity within minutes. Rhea’s team is using existing smartphone technology to create one.

Most smartphones contain accelerometers, devices that detect speed, as well as orientation changes. That means they can pick up on subtle balance shifts, Rhea says, making them perfect tools for concussion diagnosis. A field medic can simply Velcro a smartphone with this app to the injured soldier’s thigh and have him or her walk in place for two minutes while the phone collects data on acceleration and side-to-side movements. After 15 seconds of analysis, a green, yellow, or red light will appear, signaling whether the soldier should be removed from duty and given medical attention.

This app could also be useful on the sidelines of high school and college football games, he adds.

Rhea’s team is currently collecting data from and testing the app with civilian patients, some who are healthy and some concussive, as well as with healthy and concussive military personnel. He hopes to have a perfected app to the Department of Defense in less than two years.