Doing the math for a toxoplasmosis vaccine

Someone you know probably has toxoplasmosis. The Taxoplasmosa gondii protozoan, which reproduces in cats but infects many other animals, resides in nearly 1 out of 4 people over the age of twelve. The good news: UNCG senior David Sykes is working on the logistics for a vaccine to eliminate the infection in cats.

Until recently toxoplasmosis was only considered problematic when infecting pregnant women and people with compromised immune systems. In healthy individuals, the immune system fights off the initial infection, and the parasite lays dormant and seemingly benign. New research, however, suggests latent infections might still affect how the brain functions. The parasite alters dopamine levels and has been linked to behavioral changes and mental illness in humans.

Toxoplasmosis is targeted by the CDC as a Neglected Parasitic Infection due to the number of people infected and lack of attention devoted to surveillance, prevention, and treatment. Vaccines are being researched to change this, but human vaccines have proven difficult to produce and safely administer. 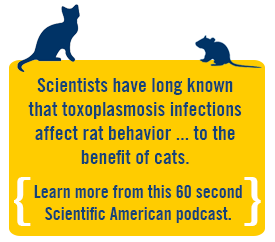 The more effective strategy is vaccinating the primary host themselves: cats. Live vaccines that prevent feline oocyst shedding (the means by which the parasite is transmitted) are currently under development.

That’s where undergraduate David Sykes comes in. His work with UNCG’s Dr. Jan Rychtar sheds new light on the logistics of feline vaccination.

Sykes is a Mathematics and Music Performance double major who began his undergraduate research career with Dr. Rychtar in 2011. They do research in the field of game theory, using mathematical concepts to study and predict behavior in strategic situations. Dr. Rychtar is interested in how game theory applies to biological interactions. For example, they have developed models for kleptoparasitism, wherein one animal steals food from another. Sykes’s most recent assignment? Find a disease to which the game theory model could be applied in an effective way.

“Toxoplasmosis is a fairly recent focus in the field of epidemiology,” said Sykes. “It was an attractive choice for studying because it is relatively new in the literature.”

Rather than study the physical makeup of the parasite or its biological effects, the team used their theoretical prediction models to establish a set of parameters and outcomes dealing with toxoplasmosis, domestic cats, and their owners. “It is important for our model that we can take the transmission dynamics and distill them into a set of differential equations,” said Sykes. “Toxoplasmosis lends itself to that transmission dynamics model.”

“The project can be thought of as having two levels. At the first level, we’re looking at optimal decisions for an individual, and at the second level we are looking at the aggregate behavior of a population.”

On the individual level, the formula that Sykes and Rychtar developed could tell a domestic cat owner whether purchasing the vaccination is cost effective, depending on a set of seven parameters.“Five of the parameters are fixed and two of them are unknown in the literature,” explained Sykes. “The unknown parameters are the increased probability that you would become infected, and the rate at which susceptible cats become infective.” Before the model can be applied for individuals, scientists must determine these unknowns through further research of the disease itself.

This is encouraging news for pet owners who might face a tough decision if and when a commercial vaccine is released. However, the model has a more immediate impact for vaccine developers.

“At the aggregate level, we found a cost threshold at which it’s not advisable for anybody to use the vaccine, as it is cost-prohibitive. Furthermore, we can show that going just slightly under the threshold significantly increases the portion of the population for which it is worthwhile to vaccinate,” said Sykes. This model provides a target price point for vaccine developers, at which the treatment would be both commercially viable and effective within the population.

The findings on effective vaccination strategies will have important impacts down the line in the process of controlling and reducing the prevalence of toxoplasmosis. Sykes has never owned a cat, but his research with UNCG’s Mathematics and Statistics Department might end up making a world of difference for felines and their owners.

Article author Mary McLean is a Media and Communication Intern with the UNCG Office of Research and Economic Development. She researches and writes articles about the on and off campus impacts of UNCG research. Mary is a sophomore at UNCG, majoring in English and minoring in Media Studies. Her interest in journalism and communication led her to her current position.