Physical activity has always been important to Dr. Jennifer Etnier, but she never wondered about how it might impact mental capacity and thought processes until her parents repeatedly asked her to help program their VCR to record football games. Her mother eventually grasped the concept, but her father never did. 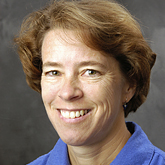 To date, that answer has been unclear. Being able to say “yes” could make it easier to motivate older adults to exercise more — if they’re concerned about maintaining their cognitive capacity. Now, Etnier is beginning to do just that. Initial results from her two-year National Institutes of Health-funded research study show staying active can safeguard mental capabilities. In fact, that benefit extends all the way down to school-age children.

To delve into how exercise impacts cognitive performance, Etnier and her team have designed studies with older adults, college students, and elementary pupils.

With adults, Etnier explores whether exercise can safeguard mental faculties of individuals at genetic risk for Alzheimer’s disease. In her study, 54 adults between ages 50 and 65 exercised three times weekly (walking and strength-training). They also completed cognitive evaluations at the study’s start, at four months, and at eight months. The evaluations included recalling words from a list of 15 words read aloud and a Stroop test, where a participant must say the color of ink a word is written in instead of reading the word itself.Everyone benefited.

“Overall, the group showed improvement in cognition associated with physical activity. This suggests that even those with a genetic risk will receive the benefit,” Etnier says. “It’s very exciting to see how long-lasting these benefits are — could we, perhaps, delay the effects of Alzheimer’s so that someone will die of other causes?”

Her team is also analyzing participants’ blood samples to examine brain-derived neurotrophic growth factor, a protein that is simultaneously responsible for strengthening synapses in the brain and pruning those the brain no longer uses. If physical activity is increasing production of this protein, the researchers may have identified one of the pathways by which physical activity is affecting cognition.

It’s clear, though, she says, that not all exercise is created equal. There could be a sweet spot — an optimal duration and intensity that evokes the best response. Working with UNCG undergraduates, she found those factors do matter, as does the timing of exercise relative to a mental task.

Participating students reviewed a 15-word list and recited the words after three 30-minute sessions on the treadmill at low, medium, and maximum capacity. They then returned 24 hours later to repeat the same word list. The students repeated the activity as a whole five times. Based on their performance, Etnier found that moderate and maximal exercise offered the greatest short-term benefits, but maximum exertion prompted the best performance the next day. 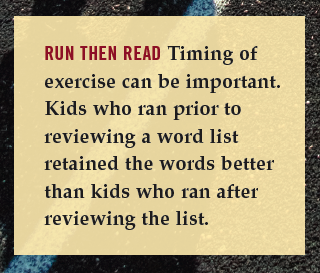 Etnier found further evidence of the importance of timing when studying children in the second, fourth, and sixth grades. Her team tested students after they exerted their maximum effort to complete a one-mile run (fourth and sixth graders) or an eight-minute run (second graders). Half of the children tested reviewed a 15-word list before the run, and half reviewed the word list after the run. They returned and were tested on their word recall 24 hours later. Those who ran prior to hearing the list remembered more words than those who ran after.

“Historically, there have been teachers who were afraid that if students exert themselves highly that it would hurt their academic performance,” she says. “We found that they actually performed better when they ran just before being asked to memorize the words than when they didn’t.”

These findings, she says, support the inclusion of physical education sessions early within the school day.