It’s no secret that playing football puts players at risk for sustaining a concussion. Research on this topic has accelerated over the past decade, with most work focusing on male players. But women play collision football too, and their numbers are growing.

This rise has researchers asking whether women experience concussions differently and if they need different assessments, treatments, and guidelines. Dr. Donna Duffy and her colleagues are trying to find these answers. It’s imperative, she says, because female football players are just as physical as their male counterparts while facing a high risk of injury. 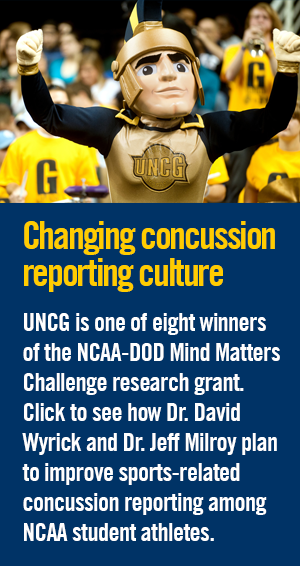 This year, UNCG became the official research arm for the Women’s Football Foundation, or WFF. With WFF support, Duffy and her collaborators want to investigate whether female collision sport athletes have different normal neurocognitive and neuromotor performance. She also wants to determine whether women’s performance drops after sustaining a concussion, how long those changes will last, and whether there are any long-term effects.

“We have a real opportunity to work with the Women’s Football Foundation in their overarching goal to improve the safety of women’s football — to make it safer and to address issues that haven’t otherwise been looked at,” says Duffy, who is also director of UNCG’s Program for the Advancement of Girls and Women in Sport and Physical Activity. “We hope that our work will inform players, coaches, and league stakeholders.”

Ultimately, Duffy hopes to create sex-specific guidelines for when players can return to the game. The researchers also want to craft return-to-work recommendations to ensure that working-age women don’t return to a full workday before they’re healthy enough.

Most current women’s sports research focuses on contact sports, such as soccer or lacrosse, where concussions happen by accident. Duffy’s research is different, highlighting concussions from collision football that result from intentional, aggressive contact. In many instances, concussions in women are blamed on weaker neck muscles, but that assumption doesn’t hold true among female football players, Duffy says. Other factors contribute. For example, she says, pilot data collected from videotaping games of 50 women on two football teams in North Carolina — the Durham Phoenix and the Charlotte Queens — showed that most women play more than one position. This increases time spent on the field and risk of injury.

Duffy’s team assessed the players’ neurocognitive and neuromotor functions at the start, middle, and end of the season, with additional assessments of players diagnosed with a concussion. This year, the researchers plan to gather data from five more teams. All results will be collected in a database and used to determine whether any neurocognitive and neuromotor changes are related to concussion, as well as how collisions that don’t result in diagnosed concussions can impact cognitive function.

Duffy and her team also conducted a women’s health survey with 30 out of the 31 WFF teams. Approximately 700 women answered questions that touched on biological and psychosocial issues women in sports face, including how women portray and negotiate their femininity when not playing a sport. The survey gathered data about a player’s individual and family injury history and broached questions of equity and how women have been treated in their roles as female collision sport athletes.

When all the research is merged, Duffy says, a new picture of female athletes will emerge. “We’re looking to debunk the myths about the stereotypical understanding of what female athletes look like and are built like.”